The Things We See – Victoria

Samplers were an important part of wealthy and lower class girls’ education from the 16th century right up until the beginning of the 20th century. They can show a girl’s interests, personality, facts about her life and her education. Sewing was an important household skill which girls had to be proficient in as part of their role running the household. Samplers taught girls lots of different embroidery techniques, as well as incorporating other parts of their education, such as knowledge of the bible. This is a beautiful window into the life of Ann Ilsley and provides an intimate connection with her as a person.

Hover over, or tap on, the speech bubbles to explore the sampler, the meanings behind the motifs and more about Ann herself.

Ann Caroline Ilsley was born on 4th August 1860 in Stowbardolph, Norfolk. Her father James, 32, was a gamekeeper and her mother Elizabeth, was 28 when Anne was born and already had another daughter, Caroline, who was 2 years old in 1860.

Between 1861 and 1871 they moved to Norfolk to Culford, 4 miles north of Bury St. Edmunds. The Culford Estate was owned by Richard Benyon de Beauvoir, one of the richest commoners in the country at the time and has a palatial 18th century mansion at its centre.

Whilst Ann and her family weren’t part of the elite by any means, a well-respected job as a gamekeeper on a large and prominent estate would have meant the family would have been comfortable, most probably living in a cottage or house on the estate. Therefore, Ann wouldn’t have needed to go to work in a factory like a child from a poor family in the city, and could spend her childhood being educated at school, playing on the estate with the other estate children and helping her mother in the house.

What is the significance of this bible verse?

“Remember thy creator in the days of thy youth while the Evil days come not nor the years draw nigh while thou shall say I have no pleasure in them.” Ecclesiastes, Chapter 12, verse 1

This verse from the Old Testament is a warning or advice to young people, telling them to commit themselves and their strength to God whilst they are young to avoid a lonely and distressing old age. It warns young people away from the excitement of being young, because these are only superficial or materialist pleasures, whereas faith and commitment to God will give eternal happiness (Life Application Study Bible 2005).

Why a bible verse?

In the 19th century, religion was much more a part of everyday life than it is now and was a key part of children’s education. They would have been taught at school, Church or home to learn bible verses and prayers off by heart and would have been taught how to behave in life in line with Christian teachings. Religious education was seen as particularly important for girls as they were responsible for their children's early education and household worship. It is no surprise then that this verse would have been one that Anne would know as it fits with the principles of education of that time.

King Pippin’s Palace, which Ann depicts in her sampler, was the title of a short story written by George Augustus Sala and published on 31st July 1869 in a magazine called All the Year Round, which was owned by Charles Dickens. Literary magazines which serialised stories or which contained short stories, essays and reviews were very popular in the 19th century. Ann might have got hold of a copy at school or from her parents and the depiction of the story gives us such an intimate connection with her, to know what she was reading.

What is the story about?

Sala starts the story by talking writing about tourist attractions in Spain, he doesn’t find them very interesting or impressive (I would disagree!), and in particular, talks about Philip II’s monastery-palace El Escorial just outside Madrid. In the grounds of the palace, Charles III built a small (in royal terms) palace/mansion in the 1770s for his son, the future Charles IV (nicknamed King Pippin in the story), to live in, hold audiences with very important courtiers, entertain close friends and as a private retreat for the royal family. The palace is actually called “Casita del Principe de abajo” (The Little House of the Lower Prince).

The piece is more of a description of Spanish tourist sites from a very critical viewer and an imagination of what it would have been like to live in a small palace. It seems as though Sala was being deliberately unimpressed to offer a different perspective on royal palaces, to critically examine what they look like, how they were used and who lived in them.

The variety of plants, trees, flower arrangements and animals in Ann’s sampler, may be influenced by her father’s position as a gamekeeper – it certainly seems as though there are pheasant and deer depicted, and the plants and flower arrangements may be copies of ones in the gardens and grounds of the estate.

These images and the border are a key part of the self-expression of the piece, where Ann is making choices of what to depict based on her own interests and elements of the world around her. 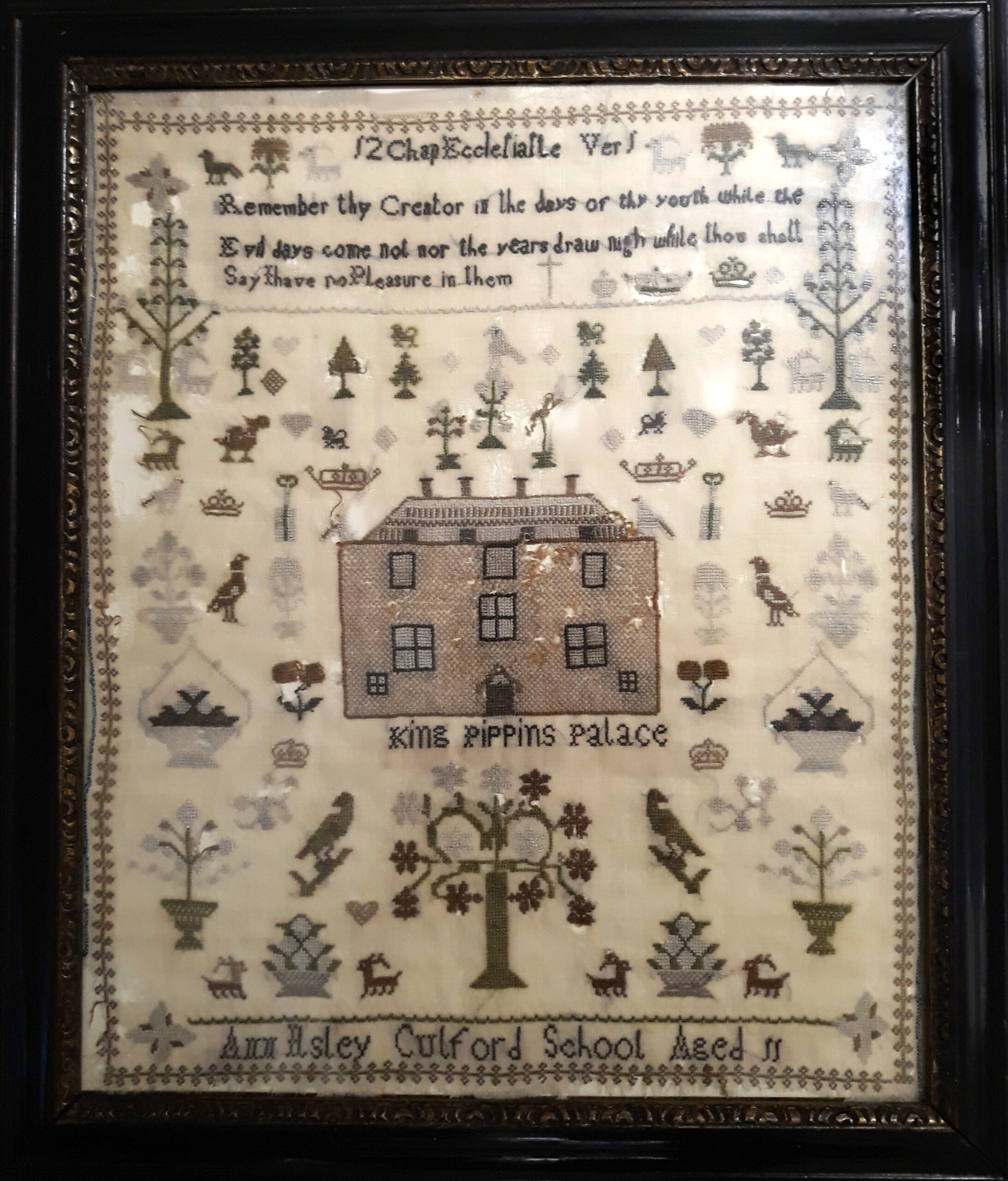 Back to the exhibition room