Happy Hallowe’en! What traditions do you follow at Hallowe’en? We’d love to hear your stories and memories 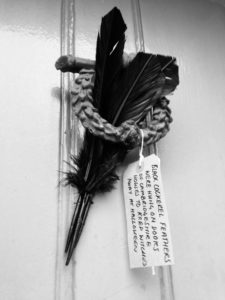 The following extract is a story told by William Kemp who died in 1906 at the age of 91. In turn, it was told to W.H.Barrett, who recalled it in ‘More Tales From The Fens’, Edited by Enid Porter.

William Kemp recounts staying at an isolated farm of an old aunt, deep in the Fens…. “While I was there Hallowe’en came around. In the afternoon everyone was busy putting osier twigs in front of all the doors and windows, the pig-styes, stables and the cow-house. Uncle killed one of his black hens and hung it on the chicken house door after he’d pulled out two of it’s wing feathers and tied them on the yard dog’s collar; then he caught the cats and shut them up in the barn. From all the talk going on I found out that this was the night when the witches went round the Fen, meeting each other and then, at the chiming of midnight, coming to the spot they’d chosen and casting spells over all the folks and animals nearby. That was why the peeled osier rods were put at all the ways into the house because no witch dared cross over them, neither would they go near black chicken feathers.
As the evening went by we all sat round the big open hearth. Aunt didn’t put peat on the fire that night because witches could smell peat smoke for miles away, she said; instead, huge logs of oak were blazing away. The candles had been blown out so the only light we had came from the fire as we sat and listened to Aunt’s stories of what the witches could get up to. After supper a plate of thick slices of ham and half a loaf of bread were stood outside on the door-stone so that, if a witch called, she wouldn’t have to go away hungry because, if she did, she might start casting her spells on us.”