Eglantyne Jebb, Founder of Save The Children 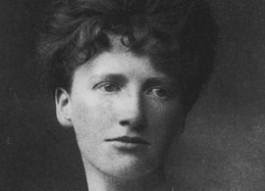 Can you imagine a world where children were forced to work from the age of nine, in terrible conditions in cotton factories or down mines? Would you have the courage to change it?

Eglantyne Jebb was born in 1876, into a world where child labour and exploitation were facts of life. Although born into an affluent family in Shropshire, her mother’s work as the founder and organiser of the Home Arts and Industries Association (an initiative founded in 1884 that provided training and schooling in traditional crafts for young people) exposed the young Eglantyne to the poverty of working class children and the social issues of her day.

Do you enjoy making things out of wood or clay? Can you draw a picture of your best ever creation and then imagine having to make it for a living?

After studying history at Lady Margaret Hall, University of Oxford (one of the first colleges open to women), Eglantyne trained to become a school teacher, but after a year’s experience she realised this wasn’t the role for her. Between 1894-1910 she lived with her sick mother in Adams Road, Cambridge trying to nurse her back to health. While there she became actively involved in charitable activities, joining the Charity Organisation Society which attempted to reform the approach to tackling poverty by the application of scientific methods. Her most important accomplishment at this time was an extensive and pioneering survey of poverty in the city of Cambridge (including child poverty) which revealed the misery and squalor of working class conditions in the area; it would be an experience that would haunt her for the rest of her life and she even published a book in 1906, Cambridge, a Study in Social Questions based on her findings.

Do you enjoy maths? Could you create a survey on how many old buildings or interesting historic sites are in your local area?

During this time, Eglantyne met and fell in love with another woman, Margaret Keynes; they had a very intense and caring relationship, but at the time  homosexual relationships between woman were frowned upon by society (however, it wasn’t technically illegal unlike same-sex relationships between men) and despite their dreams of getting married to each other, Margaret would eventually leave and marry a man in 1913 due to pressure from her parents. Eglantyne, heartbroken, would never enter another serious relationship for the rest of her life.

In 1913, Eglantyne travelled to Macedonia as part of the Macedonian Relief Fund to help starving peasants impacted by the  Second Balkan War and when the First World War ended in 1918, she campaigned alongside her sister Dorothy to end the  Allied Naval Blockade on Germany and Austria-Hungary which had continued despite their being an armistice in place and was causing famine and the deaths of thousands of children as well as unimaginable suffering. Eglantyne and her sister set up a fund to raise money for German and Austrian children called  'The Save The Children Fund' in 1919 (the basis of the modern charity) and the success of this led to the pair setting up the ‘International Save the Children Union’ in Geneva, Switzerland, in 1920, which turned the organisation into a worldwide movement. Save the Children responded to various crises during her lifetime, including a refugee crisis in Greece due to the Greco-Turkish War (1919-1922) and a famine in Russia caused by the Russian Civil War (1917-1922) and thanks to her careful planning and research-based approach—which she had refined in Cambridge—these relief efforts were largely successful. Her greatest achievement was ‘The Declaration of the Rights of the Child’ which she drafted in 1923 and was endorsed by the League of Nations a year later and would form the basis of the current United Nations convention on children’s rights today. This was the first time that the basic rights of children to be fed, protected from exploitation and provided with sufficient education had been enshrined in international law.

Aged only fifty-two, Eglantyne died due to thyroid problems in a nursing home in Geneva in 1928. Until her last breath, this extraordinary and unconventional woman fought for the basic right of children everywhere to be valued and cared for by their society, something we now take for granted in modern Britain.

For most of British history homosexual relations between men have been illegal (same-sex relations between women have never technically been illegal but have had a similar social stigma) and were punishable by hanging until 1861 when the death penalty for sodomy was abolished. Between 1861 and 1967, there were many famous cases of prominent figures being convicted of homosexual activities including the playwright Oscar Wilde who was sentenced to two years hard labour in 1895 and the mathematician and World War Two code breaker Alan Turing who was punished with chemical castration instead of a prison sentence in 1954. It was only in 1967 that homosexual acts between two men over the age of 21 in private was decriminalised in England and Wales and in 2001 the age of consent was lowered to 16 in line with heterosexual relationships. In 2013, same-sex marriage was finally legalised, exactly one hundred years after Eglantyne and Margaret’s relationship ended after the latter left to marry a man. If only they had lived a century later?

First Balkan War (8th October 1912 to 30th May 1913): The countries of Bulgaria, Greece, Montenegro and Serbia had recently gained independence from the Ottoman Empire (Turkey), yet large elements of their ethnic populations remained under Ottoman rule, so they united and formed the Balkan League and planned to attack. Their surprise assault caught the Ottomans off guard and the Ottoman Empire lost most of its territory in Europe to the League, with Serbia being the main beneficiary of the war in terms of the land gained.

Second Balkan War (29th June 1913 to 10th August 1913): Bulgaria, unsatisfied with its gains in the first war and jealous of Serbia and Greece, launched an attack on its former allies to gain control of Macedonia with its powerful army. This offensive was repulsed and Serbia and Greece counterattacked and invaded Bulgaria. Romania, sensing an opportunity to gain Bulgarian territory, then joined forces with Serbia and Greece, while the Ottomans attempted to avenge their previous defeats in the first war by attacking Bulgaria as well. Unsurprisingly, with four enemies surrounding it Bulgaria surrendered.

That’s what happens when you get greedy! Have you ever tried to eat more than you can stomach just like Bulgaria? If so, try to draw the biggest, most gigantic meal you can and imagine eating it.

When the First World War broke out in 1914, Britain and France launched a naval blockade (using ships to cut off supply routes) of Germany and Austria-Hungary. Both Britain and Germany relied on imports of food and raw materials to feed their populations and supply their war industry, however, the Royal Navy was the largest navy in the world and the Imperial German Navy (Kaiserliche Marine) could only respond by unrestricted submarine warfare on enemy shipping as their fleet was effectively trapped in port. Prevented from supplying themselves with food and raw materials due to the blockade, Germany and Austria-Hungary, it could be argued, were largely defeated because of it. However, the human price was astronomical, especially as the blockade was continued until June 1919 to ensure that Germany agreed to all of the terms of the Treaty of Versailles: it is estimated that 424,000 German civilians (including children) died as a result of starvation and malnutrition caused by the blockade during the war and an additional 100,000 died between the signing of the armistice in November 1918 and June 1919. Hunger was so prevalent during this time that conditions caused by malnutrition such as scurvy, tuberculosis and dysentery became widespread.

Did you know that scurvy is caused by a lack of Vitamin C, which can be found in oranges, limes and cabbages? Remember, a glass of orange juice could save your life!

Founded by Eglantyne and Dorothy Jebb in the United Kingdom in 1919, Save the Children is an international charity made up of 29 national member organisations which work in 120 different countries. It aims to improve children’s lives through providing better healthcare, education and economic opportunities, in addition to providing emergency aid in response to natural disasters, war and other conflicts. As a major consultant to the United Nations, it promotes the enforcement of the ‘Declaration of the Rights of the Child’ as first drafted by Eglantyne Jebb and has assisted in the provision of humanitarian aid during various conflicts including the aftermath of the First World War, the Russian Civil War, the Second World War and the ongoing fighting in Yemen.

The Declaration of the Rights of the Child

‘The Declaration of the Rights of the Child’ as drafted by Eglantyne Jebb in 1923: