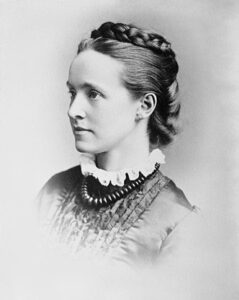 Imagine a world where women are seen as second class citizens, where they are deemed intellectually inferior to men and are unable to participate in politics through the ability to vote. Could you survive in such a world?

Forgotten hero, Millicent Fawcett, lived in such a world and devoted her life to changing it, helping to guarantee women’s right to vote and enable the improved gender equality we enjoy today.

Millicent Fawcett (née Garrett) was born in Aldeburgh, Suffolk in 1847. Unusually for the time, her father, a wealthy businessman, encouraged her to read widely and take an interest in politics—a sphere normally reserved for men. She wasn’t the only pioneering woman in the family: she was the eighth out of her parent’s ten children and her elder sister Elizabeth would later become Britain’s first female doctor. 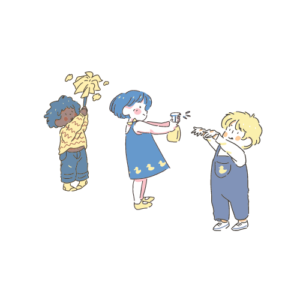 Millicent had so many siblings, she probably always had someone to play with!
Do you have siblings? If not, you might have cousins and/or friends to play with. What are your favourite games? Do you play them at home, or at an outdoor space in Cambridge? Make a drawing of your favourite game and everyone who plays it.

When she was a child, Millicent was introduced to the campaigner for women’s suffrage (right to vote), Emily Davis, by her sister Elizabeth and after attending a lecture given by the philosopher and feminist John Stuart Mill, she met and fell in love with Henry Fawcett, a Member of Parliament and a prominent economist. Tragically, Henry had been blinded in a shooting accident at the age of twenty-five, but he didn’t let this get in his way and he and Millicent married in 1867. Their marriage was a happy one and as well as caring for her husband, Millicent pursued her own writing career, writing three books including Political Economy for Beginners which made her ideas and those of her husband accessible to the general public, especially women. She had only one child, Philippa, born in 1868, whose education she strongly supported, particularly in maths and Philippa would later benefit from this when she became the first woman to obtain the highest mark in the University of Cambridge’s Mathematical Tripos exam and a successful mathematician in her own right. This belief in women’s education would inspire Millicent to leave behind one of her most enduring legacies, Newnham Hall, Cambridge, a women’s college which she co-founded in 1875. 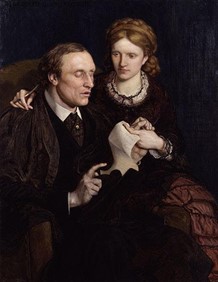 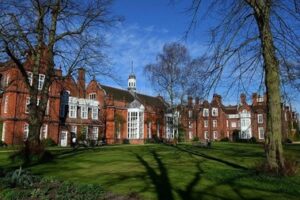 Millicent began her political career at the age of twenty-two when she attended the first ever women’s suffrage meeting. She quickly established herself as an influential member of the movement and in 1897, she became the leader of the National Union of Women’s Suffrage Societies (NUWSS) , Britain’s largest suffragist organisation. Millicent was bitterly opposed to their rival organisation, the Women’s Social and Political Union (WPSU) also known as the suffragettes. The NUWSS’ slogan ‘Law-Abiding suffragists’ summed up her moderate approach to obtaining the right to vote through peaceful and legal means in stark contrast to the militancy and direct action of the WPSU. Although Emmeline Pankhurst (the leader of the WPSU) and the suffragettes gained more publicity, it was the NUWSS that had more popular support; by 1905 it had fifty thousand members compared to only two thousand in the WPSU at its height in 1913.

As well as campaigning for women’s right to vote, Millicent championed raising the age of consent, ending cruelty to children within the family and repealing the Contagious Diseases Acts which reflected the sexual double standards that governed attitudes towards prostitution at the time. Despite all of her tireless efforts, however, it was only after the First World War ended in 1918, that Women’s Suffrage truly became a reality. During the war, the WSPU had ceased all activities to focus on the war effort as its leaders were vehemently in favour of the conflict, yet Millicent’s NUWSS had continued to campaign for votes for women as many of its members were pacifists and against the war. Through a combination of Millicent’s refusal to bow down to government pressure and the massive contribution women made to final victory, the battle was finally won for women’s right to vote.

Millicent remained leader of the NUWSS until 1919, after holding the position for an incredible twenty-two years. In her final years, she published many more books and essays including her history of the Suffrage movement, What I Remember; she died in 1929, only a year after the final parliamentary act that allowed all women over the age of twenty-one to vote, putting them on equal terms with men for the first time. She was a true heroine and a pioneer of the rights we take for granted today.

Below are some examples of suffragette protest posters. Bold letters, few colours, irony, are just some of the elements that characterise these posters.
Is there anything that you really care about and you think more should be done about? Taking inspiration from the posters below, design one for the cause you care about. 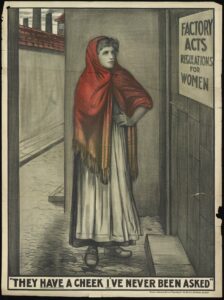 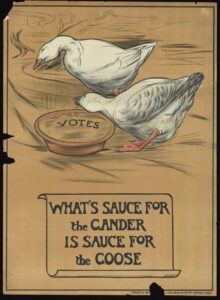 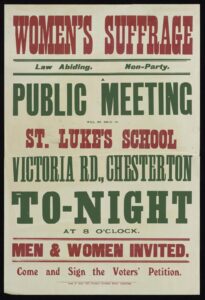 Whose side are you on? Are you a Suffragist or a Suffragette? Do you support Millicent or Emmeline? Were the NUWSS the heroes and the WPSU nothing but terrorists? Were the WPSU the feminine SAS and the NUWSS nothing better than a women’s ‘Dad’s Army’? You Decide!

The NUWSS was democratic and non-militant, its purpose was to achieve women’s suffrage through peaceful and legal means, especially through Parliamentary Acts and by ensuring pro-suffragist Members of Parliament were elected. In 1903, the Women’s Social and Political Union (WPSU), also known as the suffragettes, split from the group to take a more militant approach; from that point on the two groups would become bitter rivals and although the suffragettes gained more publicity, it was the NUWSS that was more popular with one-hundred thousand members in 1914 compared to the WPSU’s two thousand members at its height in 1913.

The majority of the membership of the NUWSS (like most women’s suffrage organisations at the time) was middle class and only a few were working class, thus limiting its ability to appeal to the whole of society. However, despite this, its approach—summarised by Millicent Fawcett as ‘like a glacier; slow moving but unstoppable’—proved effective and it laid the groundwork for women winning the right to vote in 1918.

Millicent Fawcett stepped down as leader in 1919 and the organisation continued with a new name (The National Union of Societies for Equal Citizenship) and feminist Eleanor Rathbone as its leader until equal voting rights were given for both men and women in 1928. With its work finally completed it effectively disbanded soon after.

Women’s suffrage means the right of women to vote in democratic elections; in fact, from the mid-nineteenth century onwards women around the world have campaigned to obtain this right to demonstrate that they are politically and socially equal to men.

The majority of Western countries extended voting rights to women between the First and Second World Wars, for example: Britain (1918), Germany (1918) and the United States (1920); however, some European nations including France and Italy only gave women the vote in 1944 and 1945 respectively, while Switzerland legalised women’s right to vote as late as 1971. When Saudi Arabia gave women the vote in 2015, women could officially vote in every country on earth where there are elections.

The Women’s Social and Political Union was a political movement and leading militant organisation campaigning for women’s suffrage between 1903 to 1918. It’s membership (unlike other women’s suffrage groups) was exclusive to women and it obtained its nickname, the ‘suffragettes’ from the term suffragist after a newspaper article coined the term to belittle those arguing for women’s right to vote.

Its founders, Emmeline Pankhurst and her daughters Christabel and Sylvia kept tight control of the organisation, unlike the more democratically run NUWSS; however, ironically Sylvia Pankhurst would later be expelled by her mother and sister for her socialist beliefs. The WPSU’s approach was based on its motto ‘Deeds not words’ and it would use shock tactics including civil disobedience and direct action to get the attention of politicians. Examples included prison hunger strikes, breaking windows, arson and bombing houses and churches including Westminster Abbey. These methods gained widespread publicity and historians are still divided over how effective they were; on the one hand they demonstrated how serious women’s desire for suffrage was, yet they alienated potential supporters who found their use of violence distasteful. Emmeline Pankhurst and her movement either broke down the perception of women as passive and unable to function politically or reinforced the notion women were irrational and incapable of making a considered decision while voting.

What is certain is that with the outbreak of the First World War, the British government could ill afford a potential terrorist movement setting fire to its politicians’ homes and bombing national monuments, so a compromise was reached: if the WPSU ceased all activity and supported the war effort then women would be given the right to vote (if Britain won of course). Emmeline and her daughter Christabel accepted this wholeheartedly and were vehement in their support of the war, even encouraging the handing out of white feathers (the traditional symbol of cowardice) to young men who hadn’t enlisted to fight. In 1918, after Britain’s victory women finally won the right to vote partly thanks to the efforts of the WPSU.