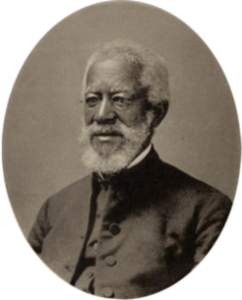 Imagine a world where you are seen as an inferior in the land of your birth. Alexander Crummell existed in such a world and had the determination and foresight to try to change it. Alexander Crummell was born in 1819 in New York to Boston Crummell—a former slave—and Charity Hicks, a free black woman. His parents were active abolitionists and their home was used to publish the first African American newspaper, Freedom’s Journal, which promoted the abolition of the slave trade; Alexander was strongly encouraged by his father to take part in the struggle for African American rights and as a young boy he would work for the American Anti-Slavery Society, an experience that would shape him for the rest of his life.

Have a go at creating your own short newspaper article based on Freedom’s Journal, telling about what is going on in your local area. Think of a catchy name for your newspaper, and you can even add photos or drawings to illustrate your article.

For a free black man of the time, Alexander was well educated and began his formal education at the African Free School in New York alongside other future African American abolitionists James McCune Smith and Henry Highland Garnet. After graduating from the Canal Street High School, Alexander started at Noyes Academy in New Hampshire; however, he wasn’t there for long as the school was soon attacked and destroyed by an angry mob opposed to black students. During his studies at the Oneida Institute in central New York, Alexander realised his calling was to become an Episcopal (Protestant) priest, while his talent as a preacher ensured him a place as a keynote speaker at an anti-slavery convention in 1840. 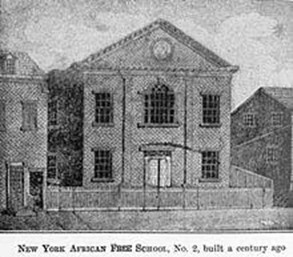 Lithograph of the African Free School, 1922

Unable to enter the General Theological Seminary in New York City because of his race, Alexander studied theology in Massachusetts where he was ordained in 1842. He quickly realised that racism within the Episcopal Church hierarchy in America was endemic and in 1847 he travelled to England to raise money for his small congregation at the Church of the Messiah, Providence, Rhode Island. While in England he preached, spoke about abolitionism in the United States and raised nearly $2,000, the equivalent of $64,150 in today’s money. With the sponsorship of the historian Thomas Babington Macaulay and the surgeon Benjamin Brodie he studied at Queen’s College, Cambridge between 1849-1853 and despite the fact that he had to take his final exams twice to receive his degree, he is the first black student officially recorded as having graduated in the university’s history. He lived at 12/13 Botolph Lane while in Cambridge. 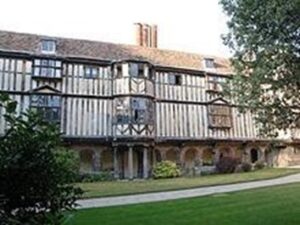 It was while studying at Cambridge that Alexander developed his theory of Pan-Africanism , which became his central belief for the advancement of the African race. He believed that all those of African descent in the Americas, West Indies and Africa should unite as one race; this racial solidarity would therefore—in theory—prevent slavery, discrimination and continued attacks on African people throughout the world. In 1853, Alexander moved to Liberia , a country founded as a colony for free black Americans, to preach his message. As a missionary for the American Episcopal Church he aimed to convert native Africans to Christianity and he encouraged ‘enlightened’ or Christianized ethnic Africans in the United States and the West Indies to go on a civilising mission to make the African continent Christian. Although he was highly successful as a preacher in Liberia, few American blacks were interested in his call to convert native Africans—they were more concerned with the struggle to obtain equal rights in their own country. Furthermore, the indigenous tribes in Liberia such as the Kru and Grebo had little time for African American missionaries who treated their own beliefs as inferior. Ultimately, Alexander’s dream of a united racial and Christian African identity never materialised and he returned to America in 1873. He never stopped working for a better world for black people and he spent the last years of his life founding an academy for African American scholars which opened in 1897. Alexander died a year later in 1898, aged seventy-nine. The great contradiction of Alexander Crummell’s life was that he was a passionate abolitionist and advocator for black rights, but also a supporter of the colonisation of Liberia and the—often forced—conversion of African natives by African Americans. However, he should be remembered for his influence on twentieth-century black nationalists and Pan-Africanists, including Marcus Garvey and W. E. B. Du Bois, whose ideas helped found the world we know today.

Abolitionism was a movement that sought to abolish slavery. It developed in the late eighteenth-century in America and Western Europe as the ideals of the Enlightenment and the American and French Revolutions—liberty, equality and fraternity—increasingly came into conflict with the exploitation and barbaric treatment of slaves.

British abolitionists such as William Wilberforce helped lobby Parliament to outlaw the international slave trade in 1807, but the practice of slavery still continued throughout the British Empire until 1833. In contrast, the United States had already abolished slavery in the northern states by 1804, yet the southern states were only forced to end slavery in 1865 after their defeat in the American Civil War and the passing of the Thirteenth Amendment to the U.S. Constitution which enshrined it into law.

Today, international law makes child and adult slavery illegal, however, human trafficking for labour and for sexual bondage continues and over forty million people are estimated to currently live in some form of slavery.

Pan-Africanism is a global movement that aims to encourage and strengthen the bonds of solidarity between all Africans and those of African descent. The movement has its origin in the struggles of the African people against enslavement and colonisation and can be arguably traced back to resistance on slave ships, plantation rebellions and the ‘Back to Africa’ movements of the nineteenth-century.

At its heart, Pan-Africanism is a belief that all African people both on the continent and worldwide share not just a common history, but a common destiny. Pan-African intellectual, cultural and political movements view all those of African descent as belonging to a single ‘race’ and shared cultural identity.

Liberia or the Republic of Liberia is a country on the coast of West Africa, bordered by Sierra Leone to its northwest, Guinea to its north, Côte d’Ivoire to its east and the Atlantic Ocean to its south-southwest.

The country started as a settlement of the African Colonisation Society, who believed that African Americans had a greater chance of freedom and prosperity in Africa than in the United States. Liberia declared its independence from America on 26th July, 1847; however, the United States did not formally recognise this until 1862. The Liberian flag and constitution are heavily based on those of the United States and in January 1848, Joseph Jenkins Roberts—a wealthy, free-born African American from Virginia who settled in Liberia—was elected president of Africa’s first and oldest modern republic.

African American colonists intermarried with native Africans near their initial settlements in the country and their descendants (Americo-Liberians) would become the dominant political elite of the country until late into the twentieth-century. Americo-Liberians did not relate well to indigenous African tribes such as the Kru and Grebo who had a different language, culture and religion to themselves and it was only in 1904 that indigenous peoples were allowed birthright citizenship in Liberia.

Modern Liberia has been weakened by decades of civil war and the 2013-2016 outbreak of Ebola, meaning that by 2015 83% of its population was living below the international poverty line.