As part of our Tracing Traditions project, we are collecting your stories about calendar customs. Here is the first in the series, from Lillian, who works as a volunteer at the Museum of Cambridge.

We had very different Easter traditions when I was growing up as a child in California, compared to those over here. Each year, we would hard boil at least two dozen white chickens’ eggs and then use watered-down food colouring to dye their shells. 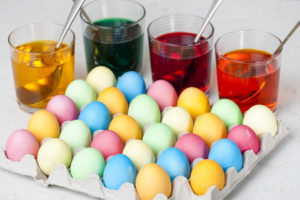 We were quite creative with it, dipping each in one colour for one side, and then another colour for the other and sometimes more, getting two, three or even four tone effects. There were little egg dippers that you could always buy at the mall, at that time of year, to help. Another technique was to use a white crayon or a candle to draw on the eggs before starting to dye them. The wax would seal the shell and stop the dye from sinking in.

All of this would be done in the one or two days leading up to Easter.

On Easter morning the coloured eggs would be concealed around the house and garden (presumably by the Easter Bunny) and we kids would go out and try and find them all. We would often find Easter baskets hidden along with the eggs, which would always contain a soft toy rabbit or chicken. 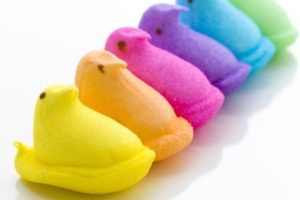 My mom would take the eggs we had found and use them to make devilled eggs for everyone to snack on.

We would also attend an Easter Parade each year and each of us would always be given a new dress to wear, traditionally made by my mom herself. Mine was usually pink, and my sister and I often matched. My family was not very religious, but we did go to a few Easter services at a multi-faith church as children.

When I moved to the UK, I was surprised to find that, while there were some Easter egg hunts, they were primarily for pre-wrapped chocolate eggs. There was no tradition of dying hard-boiled eggs but there were a plethora of hot-crossed buns! Giving large chocolate eggs to children and teenagers was something I had never seen before. We didn’t have them at all in the United States.

When I studied in Winchester, at 19 years old, the number of eggs each person received seemed very important. It was almost a like popularity contest. It seemed a lot more like Easter was celebrated with your peers as well as your family, where I had always previoulsy experienced it as a strictly family affair.

See more of Your Stories on our dedicated page.

Pictures of egg dying and Marshmallow Peeps are 123RF stock and copyright phbcz and arinahabich respectively.

Tracing Traditions, a project funded by the Esmée Fairbairn Collections Fund and delivered by the Museums Association