Lucy Locket lost her pocket, Kitty Fisher found it; Not a penny was there in it, Only ribbon round it.

During a recent open-the-box  activity, our volunteers unearthed two fascinating items. They were labelled as peg bags, but nothing could be further from the truth. They are examples of 18th or 19th century white cotton pockets, commonly used by women of the day. Friend of the Museum of Cambridge Carolyn Ferguson investigates their link with a local story and a famous nursery rhyme. 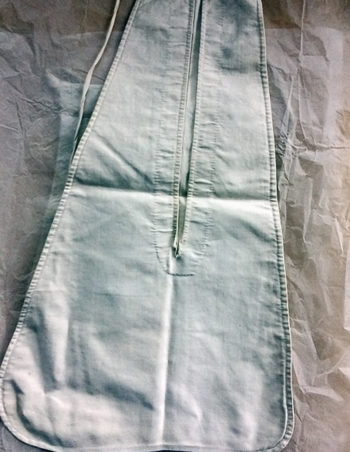 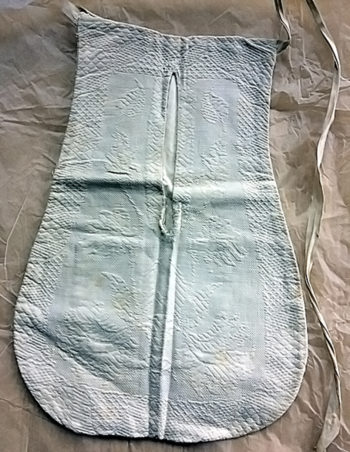 Our pockets are similar to those that Lucy Locket would have had tied round her waist, beneath her skirts or apron. Pockets were not glamorous, expensive items, but importantly they gave women a small, secure and private space at a time when they had almost no rights to property. The pocket on the above right has a secret inner pocket for some very special object. A gold coin, perhaps?

Pockets followed the same basic design for the best part of 200 years. Most of the time, they were used to hold everyday objects such as coins, sewing tools, pill boxes, snuff, pocket almanacs, letters or the odd aide-memoire.

There are various ideas for the origin of the red flag that she hoisted to mark her position. Was it a red handkerchief or just a piece of cloth cut from her red flannel petticoat? Almost certainly it was the latter, red petticoats would have been an essential part of her clothing. She would probably have kept scissors in her pocket and could have used them to cut out a flag or pennant. Without her pockets and their life-giving contents, Elizabeth would almost certainly have died.

We are pleased to have found a link between our collection, the story of a remarkable local woman and a nursery rhyme that has been popular with generations of children – a great example of our Tracing Traditions  project in action.

Tracing Traditions, a project funded by the Esmée Fairbairn Collections Fund and delivered by the Museums Association