We are excited to announce that we have partnered with Ghost Hunt UK, who will be hosting paranormal vigils in our Museum on selected nights during the year. Each event will be led by a paranormal activity investigation team experienced in hosting similar nights in heritage buildings throughout the region, so you can be assured that you are in safe hands. You will never be left on your own – unless you want to be!

Tickets for each event are limited and being in a small group will ensure a more personal experience as you explore the different floors of the Museum, armed with an intriguing variety of equipment to record, monitor and engage with the supernatural.

Whether you believe in the paranormal world or not, our quirky, old maze of a Museum can certainly be more than a little spooky at times, especially after we have closed up at night

Staff, volunteers and visitors, both past and present, have heard unexplained footsteps. Lights turn on and off in various rooms without anything or anyone present to trigger the sensors. Passers-by have summoned the police in the early hours of the morning, convinced that someone is in the Museum, but searches have revealed nothing. Other unexplained events include a lamp that spontaneously exploded, office equipment unexpectedly moving, books falling from shelves and untraceable smells of antiseptic and tobacco in various rooms. Some visitors have reported the sensation of an unseen presence in particular parts of the building along with sudden temperature fluctuations.

As you might expect, a building dating back to the seventeenth century resonates with history

At one time or another, a coaching inn, a fish shop and a sweet shop have occupied some, or all, of 2-3 Castle Street and  ghost stories have always been told about the building. Many years ago, the sweet shop owner’s son claimed to have met a stranger wearing a large, plumed hat in one of the attic rooms. The White Horse Inn was a billet for soldiers during the Civil War, so perhaps it was the errant spirit of Cavalier. More recently a decorator, who 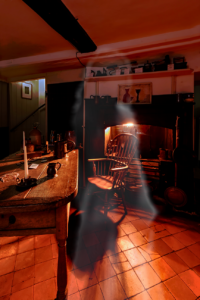 was in our Museum alone after closing time, reported seeing a pair of ghostly legs climbing the stairs towards the same attic. Unfazed, he explained that he had seen many such things throughout his life and that the ethereal presence was nothing to  be alarmed about.

The Museum has its own mystery – a hidden room

Reginald Lambeth, curator of the Museum during the late 1940s, is supposed to have discovered a hidden room, after noticing a small upper storey window unrelated to building he knew. His investigations revealed a blocked up door that led to a . previously unknown room that was empty save for a chair over the back of which was draped a vintage dress. Unfortunately Lambeth failed to record the details of his find, which remain shrouded in mystery. There are many apocryphal tales of the owner of the dress and her possible fate.

The room was removed during later renovations, although the window may still be there at the top of the rear stairs. Even today that area of our Museum always feels just slightly colder than anywhere else in the building.

A ghost or two, or maybe more…

We were lucky enough to experience a taster evening with Ghost Hunt UK and, during a spirit board session, we were advised by a spirit present that there were as many as fifty ghosts associated with the building, so if you come to one of our Ghost Hunts you may be in for a busy evening!

Perhaps you will meet our Cavalier or come across the owner of the discarded dress? Sceptic or believer, it is a fascinating and highly enjoyable way to spend an evening… If you are brave enough!

For further details and tickets for Ghost Hunt events at the Museum, visit Ghost Hunt UK’s website. Events are for adults only, you must at least 18 years old.

Every Museum Should Have a Ghost or Two: Introducing Ghost Hunts with Ghost Hunt UK