Over the years, many labour-saving devices have been developed to simplify tasks in kitchen. Friend of the Museum Carolyn Ferguson takes a look at one of the more unusual examples

The Museum of Cambridge is full of unusual and fascinating items and the Follows and Bates Tabletop Marmalade Maker is surely one of them. 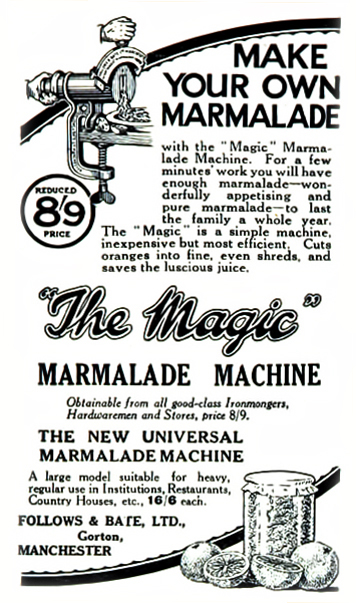 Follows and Bates was a Manchester-based light engineering company founded in the 1870s. They specialised in horticultural equipment, such as lawnmowers, but by the 1880s had branched out into grinding and painting equipment. In the early 20th century they diversified further and began manufacturing marmalade cutters such as the one to be found in the collection.

An advert for the Marmalade Maker published in January 1929 claims that this magic machine could make marmalade in minutes. They obviously forgot, or chose to ignore, the many hours standing over a boiling pan that were to follow while making the tangy breakfast preserve.

BY 1933, Follows and Bates had produced a less expensive rapid edition that would allow an eager cook to make a whole pound of marmalade for a mere three old pence. Unfortunately, there isn’t a copy of this version in the Museum. 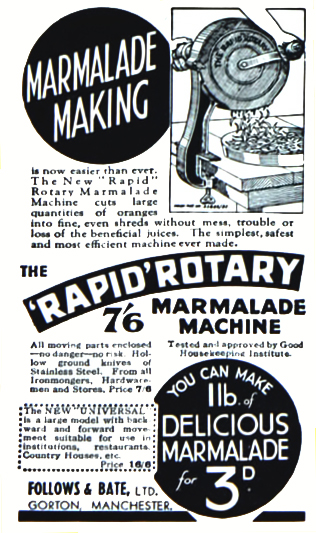 Would anyone use such a machine in 2018? Probably not.

The versatility of electric food processors mean that we have other methods to cut up peel and few people have the cupboard space to store items of such limited use. Perhaps this was reflected in the fortunes of Follows and Bates; the firm was bought out by Qualcast, the well-known manufacturer of lawn mowers and a direct competitor in the garden equipment business, in 1938.

The Marmalade Maker is on permanent loan to the Museum of Cambridge from Magdalene College and is part of a bequest made to them by Gavin Macfarlane-Grieves in 1974.