What should you do if a witch enters your home?

A visit to our latest temporary exhibition Safeguards Against Witchcraft will provide some guidance and we’re pleased to announce that we’re extending its run so there’s more time to see it. You will have until Sunday 25 March 2018 to discover the fascinating local practices and belief systems related to witchcraft and magic and there’ll be more exciting complementary events in that time too  – so keep an eye out!

We know there was much that could be done to protect a home and those within against sinister supernatural forces. Quite often objects were hidden, secreted close to entry points to draw witches away from inhabitants, distracting or trapping them. Shoes and bones were frequently concealed as well as witch bottles which were sometimes also filled with thread and hair to ensnare a witch and stop them from escaping once they climbed in. Such objects have been discovered hundreds of years later during renovations – one of the bones on display was found in 1959 in the foundations of the stables of the former White Horse Inn, which later became part of our Museum. 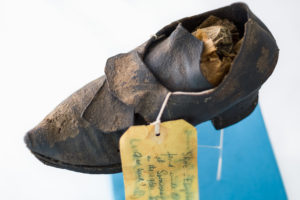 If a witch did enter a home, despite these obstacles, it was believed that placing metal objects such as a key or a pair of scissors under the witch’s chair would render them powerless as metal, especially iron, was thought to have magical properties. The same would be done with holly branches as people thought that drawing blood from witches would break their spells!

The World of Magic

Enid Porter, long-term curator of the Museum of Cambridge (1946-1976) and notable oral historian, contributed hugely to our understanding of Cambridgeshire folklore through her collection of objects and oral histories from the local area. Her publication Cambridgeshire Customs and Folklore was the culmination of this work and the chapter on The World of Magic largely inspired this exhibition. Enid demonstrates how the actions of regular people preventing bewitchment can be just as interesting as those with the power to bewitch – especially since many safeguards were, essentially, magical counter-rituals. You’ll be able to see some of the rarely displayed objects she acquired for our folklore collection alongside some of the tales she collected.

We’ve tried a few safeguards out ourselves around the Museum – see if you can find them in your next visit!

They seem to be working so far.

The exhibition will run until Sunday 25 March 2018 and is part of Tracing Traditions, a project funded by the Esmée Fairbairn Collections Fund – delivered by the Museums Association.