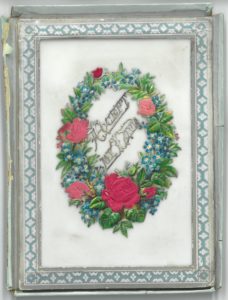 Valentine’s Day, otherwise known as Saint Valentine’s Day, occurs on 14 February every year. Originally a Christian feast day to honour Saint Valentinus, it is nowadays regarded as a day of romance across the world. Valentine’s Day cards were first exchanged during the nineteenth century and their designs and uses have changed considerably over time, as can be seen from some of the range of items we have in our collection. 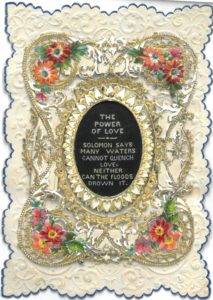 Many of our early cards were sent in quite robust packaging, such as a strong card box with a lid, rather than just an envelope. The image to the right shows one of the earliest commercial boxed cards, made by B. Sulman during the the 1860s.

Unlike modern cards, which commonly fold along a central seam and have to be opened to reveal a notes of love, the earliest cards in our collection are just two-sided, with a pre-scribed sentiment on the front. They must have left much to assume on the part of the recipient. Sometimes, longer messages are enclosed in an oval frame and surrounded by decorative floral patterns and lace trimmings.

A few our cards include an intricate and delicate image in a central frame above a short, printed note below. Occasionally, the message may be oddly obscured by other parts of the card or lacework and can only be read after lifting the loose layers. 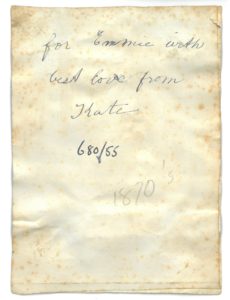 There is rarely much information about either the sender or the recipient. Many of our cards have nothing written upon them. Some include just a brief handwritten note, with either a to or a for and the name of an individual. 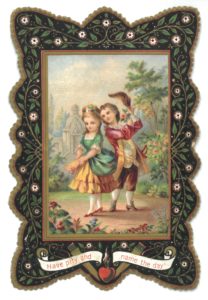 Some do include a longer, handwritten personal note that gives away a few details of the sender. Sometimes the cards were sent between friends and sometimes they were exchanged between members of the same sex.

Several of our cards reveal more, on closer inspection. The example on the bottom left hides a simple paper mechanism that creates a pop-up effect when triggered. Others feature more complex designs that once could simulate movement but, unfortunately, they have become too fragile or loose to operate anymore.

Accept My Love is part of Tracing Traditions, a project funded by the Esmée Fairbairn Collections Fund and delivered by the Museums Association